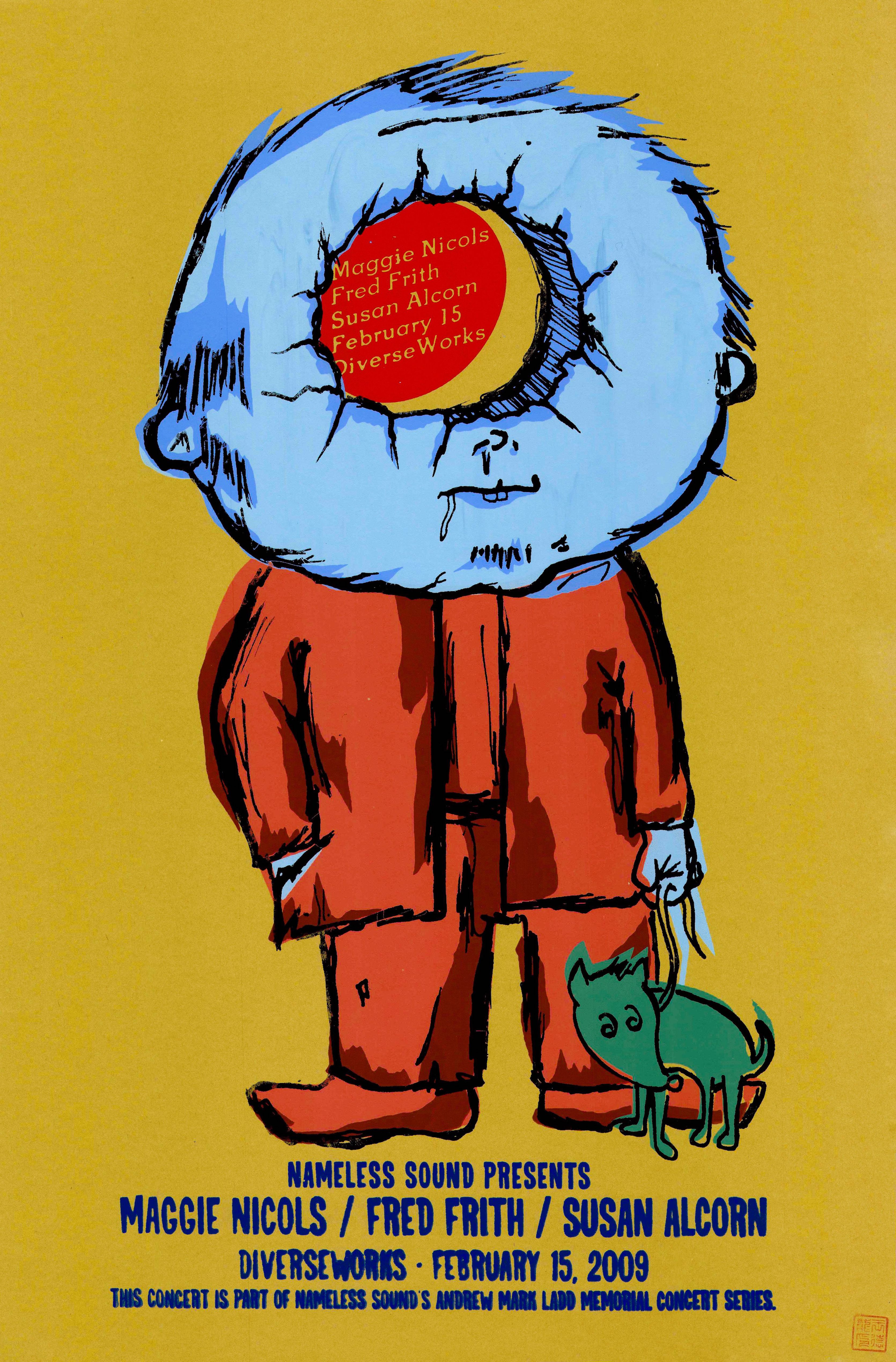 Maggie performed in a concert that featured her first ever collaboration with English guitarist Fred Frith. It was also pedal steel guitar innovator (and former Houstonian) Susan Alcorn’s first encounter with Frith. The three played a set of duos for the first half of the program. A trio improvisation followed the intermission. Before revisiting the archived video and audio, there was some concern about the effects that Maggie’s nasty cough and sore throat might have had on her performance. Though it seems that she may have had some limits from the unfortunate situation (her voice does indeed sound different), it also seems that the limitation had the effect of enhancing certain aspects Maggie’s vocal style. It’s a beautiful performance and an example of how a great improviser can respond to the circumstances of the moment. – DAVID DOVE

Richmond hall AT THE MENIL COLLECTION 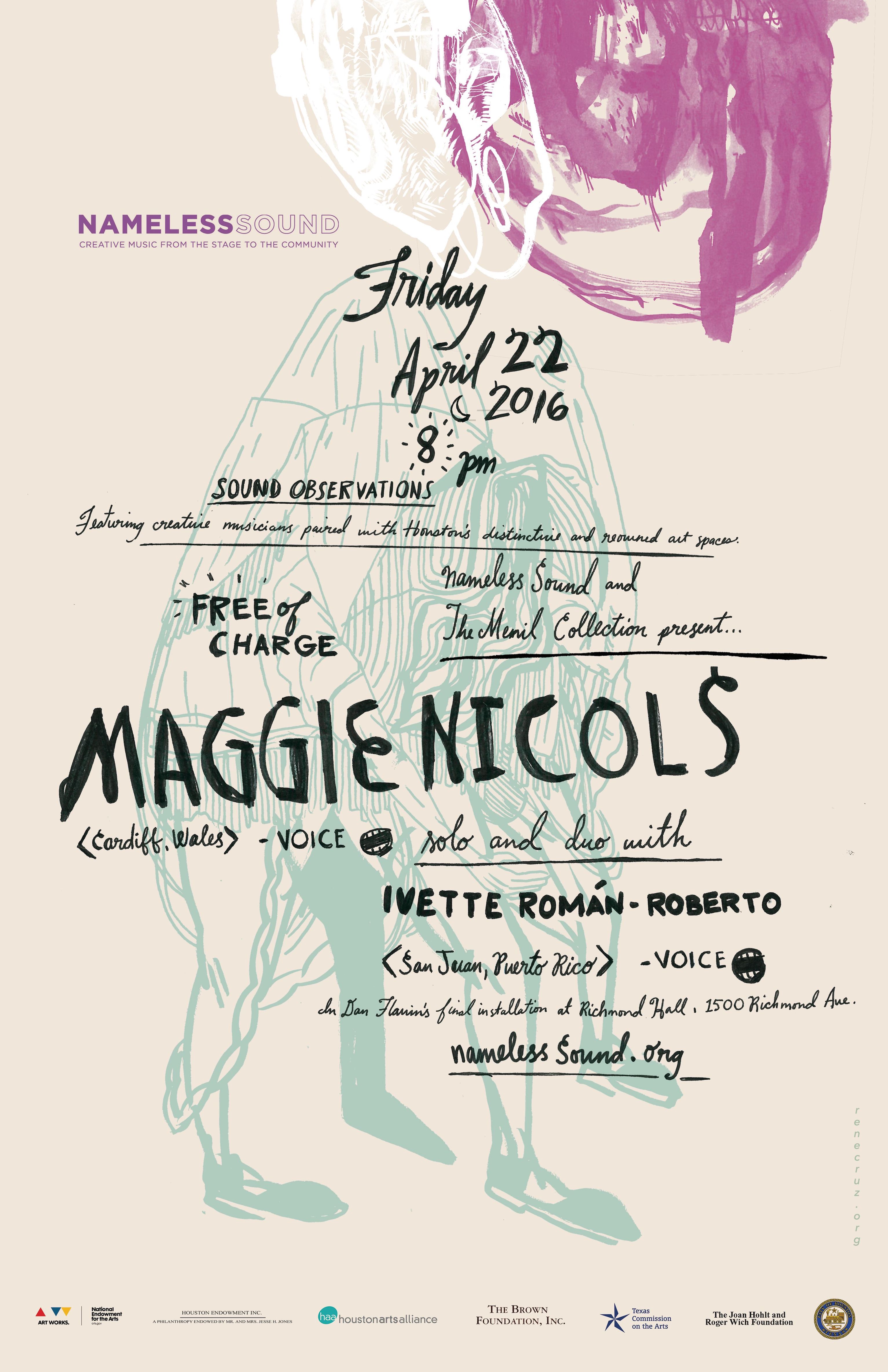 Maggie’s official public performance on this second residency featured a solo and duo performance with one of my favorite Houston improvisers, vocalist and performance artist Ivette Román-Roberto. A native of Puerto Rico, Ivette was again living on the island at the time of this concert. Ivette and Maggie are truly kindred sprits, both with a background in theater and unafraid to employ humor in the improvisational setting. (Look for their attack on “straight-man” and Nameless Sound recording engineer Ryan Edwards.) And both are educators, committed to the healing potential of music and community-building potential of improvisation. Getting them together among the Dan Flavin’s in the Menil Collection’s beautifully resonant Richmond Hall gave me great joy. And if that wasn’t enough, the second half of the concert featured an ensemble of some of Houston’s finest, bringing Maggie and Ivette together with Keisha Cassell, Sandy Ewen, Sonia Flores, Emily Nelson, and Rebecca Novak.
– DAVID DOVE

When I saw Maggie Nicols perform in 2009 I was mesmerized by her uninhibited stage presence and the mastery of her voice. I had a chance to talk to her during a break of this trio performance along with guitarists Fred Frith and Susan Alcorn, curated by Nameless Sound in the former downtown DiverseWorks site. I remember how accessible, humble and sweet she was during this conversation. I was not surprised we shared the same passion for teaching and community involvement we women music performers believe necessary, to nurture a new generation that is more inclusive and fair.
‍
I thought, “How much fun would it be to sing with her?” without suspecting that in 2016 David Dove was going to ask me to sing a duo with Nicols. In 2016 she came back to Houston to receive Nameless Sound’s Resounding Vision Award, and afterwards, to perform various concerts including the duo we performed at Richmond Hall of the Menil Collection.

We improvised a piece that started slowly and almost silently, but it grew in intensity and theatricality, ending with casting spells to the sound engineer Ryan Edwards, and scanning energies from the public to produce voice sound alchemy. It is always rewarding to see an audience fully engaged in a symbiotic relationship with the artists which it is what I experienced happening during this piece. The performance concluded with a powerful ensemble piece, together with musicians Keisha Cassel, Sandy Ewen, Sonia Flores, Emily Nelson, and Rebecca Novak.

Later that week Maggie Nicols and I did a workshop at the Alliance’s Kijana Youth Program that was as rewarding as the show. The young participants, a very talented group of refugee and immigrant students, brought their musical knowledge and chants from their upbringing to the workshop to create new sounds and improvisations. The kids loved the teaching style of Maggie Nicols, which was very ludic and expansive. I loved the warm interaction of the participants with us and knew we were providing not only music, but also the comfort and sense of stability and safety all immigrant children deserve and are in their absolute right to receive.

Sharing the stage and the workshop with Maggie Nicols was very inspirational, the kind of experience that reminds you why you are doing what you do, and the importance of conviction and total surrendering to one’s mission in life.  – IVETTE ROMÁN-ROBERTO

A short camera phone clip catches Maggie sitting in with Curley Cormier and The Gladiators, the band at Nameless Sound’s favorite juke joint, The Silver Slipper. The 60-year-old club is legendary among our guest musicians, and Maggie joins the short list of those musicians bold enough to sit in with the band. (The Silver Slipper has become an important part of the Nameless Sound experience. Guitar player/bandleader/owner Curley Cormier is the only musician from outside of the experimental music world to receive our Resounding Vision Award.)   – DAVID DOVE

And last, but most definitely not least, was Maggie’s duo performance with William Gray. These are the two who I dreamed about seeing on stage together. A long time member of our workshop ensemble, William Gray is a young musician of a singular style and extraordinary abilities. (William can identify any frequency that he hears. And that is only one example of his abilities.) The performance took place at the weekly series called They, Who Sound (TWS). Now officially part of Nameless Sound programming and held at Lawndale Art Center, TWS was then my personal non-Nameless Sound DIY series held at the local bar Avant Garden.  – DD

We encourage you to not only watch this very spontaneous and empathetic first-time duo improvisation, but to watch the recent Zoom conversation with Maggie and William recorded especially for this edition. If my career as a curator had ended after bringing these two together on that night, I could retire satisfied that I had indeed been part of something special. – DD 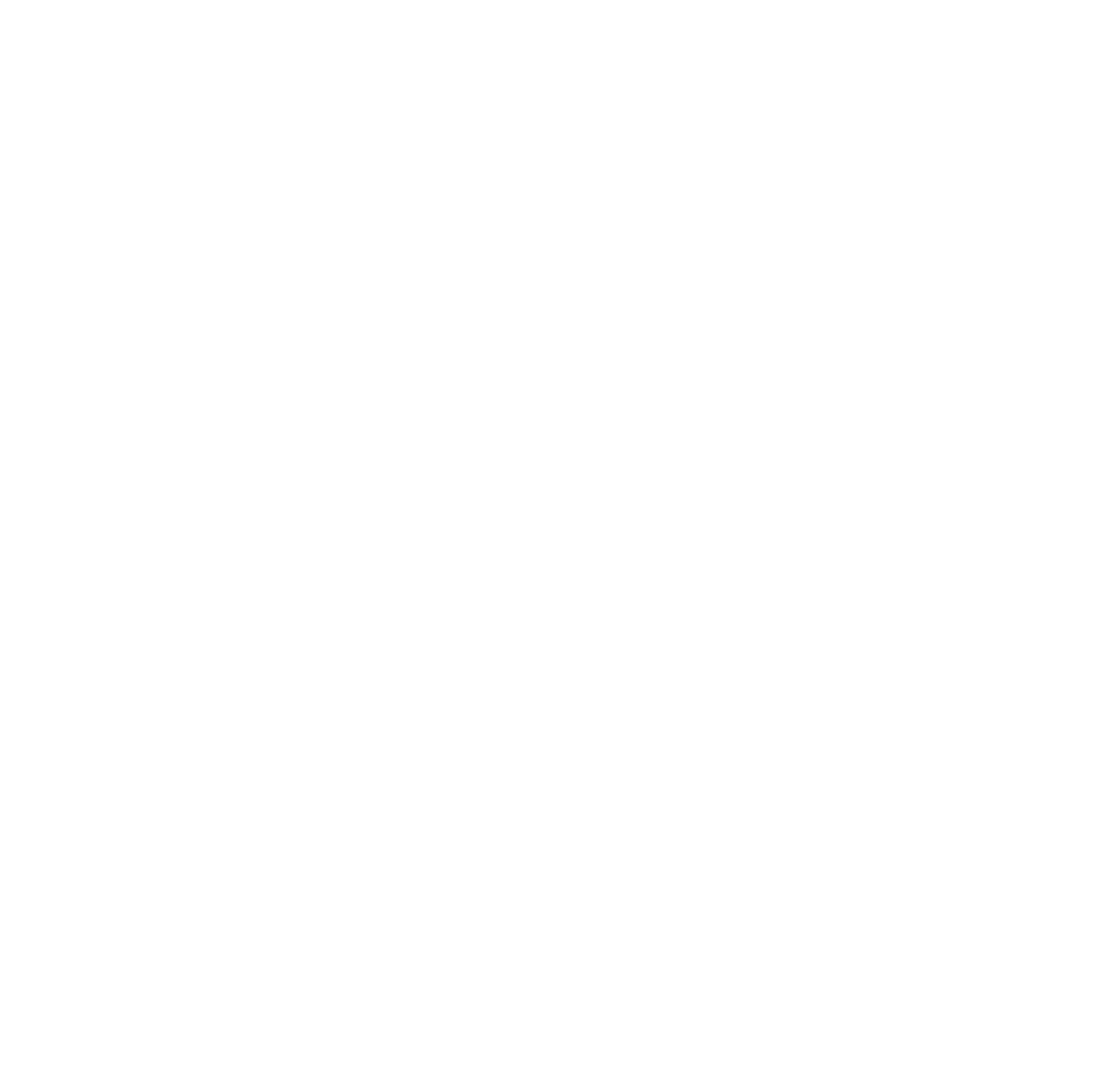