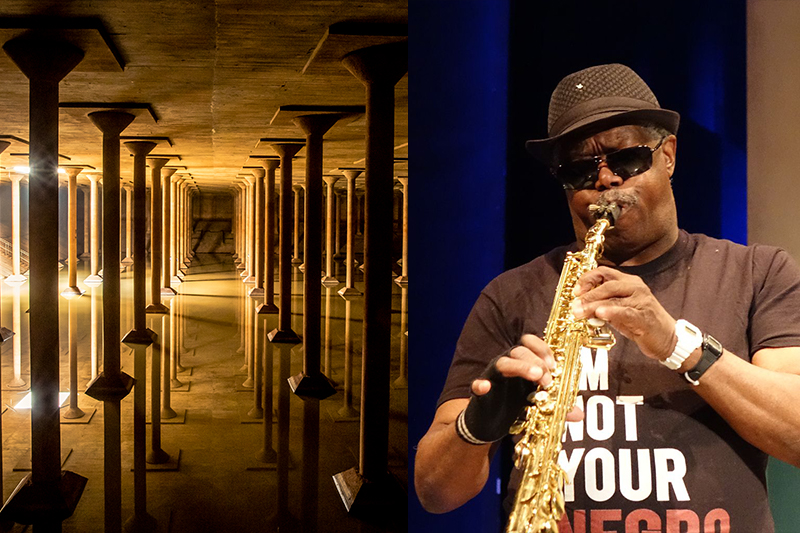 Each performance features McPhee in a different quartet with Houston musicians.

Attendance for each concert is limited.

Buffalo Bayou Partnership and Nameless Sound present four unique concerts by multi-instrumentalist/improviser/composer and creative music icon Joe McPhee. Each event will feature McPhee in a different quartet with three Houston collaborators, displaying both the wide range of sonic expression in Houston’s creative music community and the range in McPhee’s own practice. The performances will feature a solo from each player, followed by an ensemble section. It will be site-specific, improvised in response to the Cistern’s special acoustics and its 17-second reverberation.

Joe McPhee has a long relationship with Nameless Sound. In June 2001, after a week of working with youth at the arts community center MECA, McPhee dedicated a piece to the young people in a Houston concert, stating "I think some seeds were planted for something that’s going to be very important here in Houston in the future. I think there is going to be a Houston school, as it were. There will be a Houston school of improvised music which will have its own characteristics and its own heroes."

Direct and emotionally expressive, Joe McPhee’s horn playing exemplifies the instrument as an extension of the human voice. His music “speaks”, even suggesting a lyrical consciousness in its phrasing and construction. Its sense of humanity is mapped in the range of its intimate stories and ecstatic cries. But while McPhee’s music is one of direct communication, it also reveals that authentic human expression may necessitate profoundly experimental approaches. Though identified with the radical movements of jazz in the 1960’s, Joe McPhee has always been a steadfast individual.

Joe’s Houston collaborators comprise a wide range of sonic voices and include many of Houston’s most vital experimental improvisers. Audiences may be interested in attending more than one of these distinct performances in order to hear McPhee in collaboration with the different musicians.